Masterplan of rehabilitation of the gardens, parks and hydraulic structures

"The carps' pond amused her more [...] Frederick had seated himself by her side uner the linden-trees. He saw in imagination all the personages who had haunted these walls - Charles V., the Valois Kings, Henry IV., Peter the Great, Jean Jacques Rousseau, Voltaire, Napoléon, Pius VII, and Louis Philippe [...] He was stunned by such a confusion of historic figures, even though he found a certain fascination in contemplating them, nevertheless." 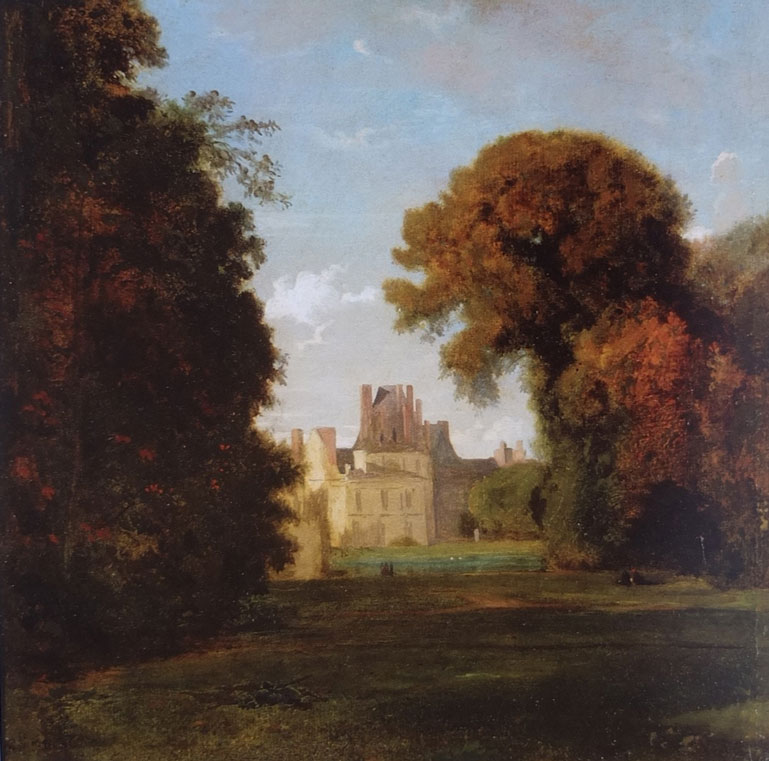 The domain of Fontainebleau is like this procession of characters that populates Flaubert’s imagination. It is a collection of interventions and places, making however a unique and consistent masterpiece.

The masterplan of rehabilitation offers to reintroduce to site in its territory, in a temporal way but also hydraulic, pedologic, ecological, to understand it as a situated subject. The issue is not to recover a state of the domain at one time but to question through the Masterplan the work itself, the way we perceive it and its translation into the site. 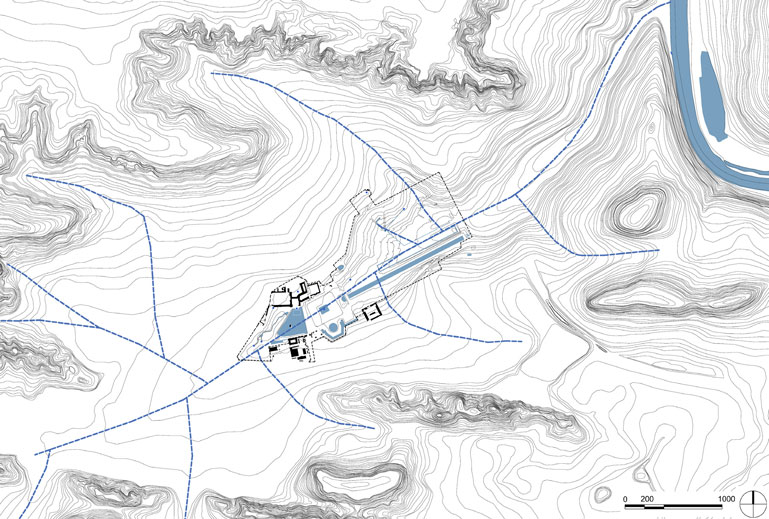 This relationship to the valley, to its geography, its hydrology has governed through centuries every intervention, whatever the periods and the models were. 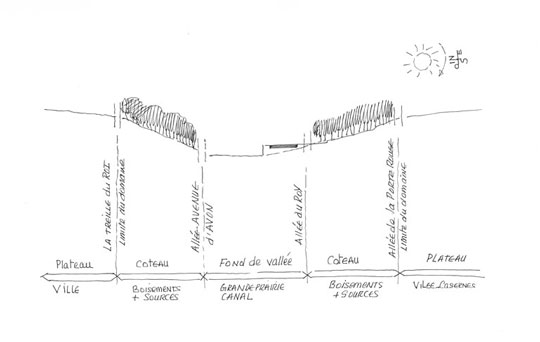 Fontainebleau placed in its proper geography

Fontainebleau it’s a geography: the main frameworks and perspectives from the bottom of the valley

Put through the domain and its territory 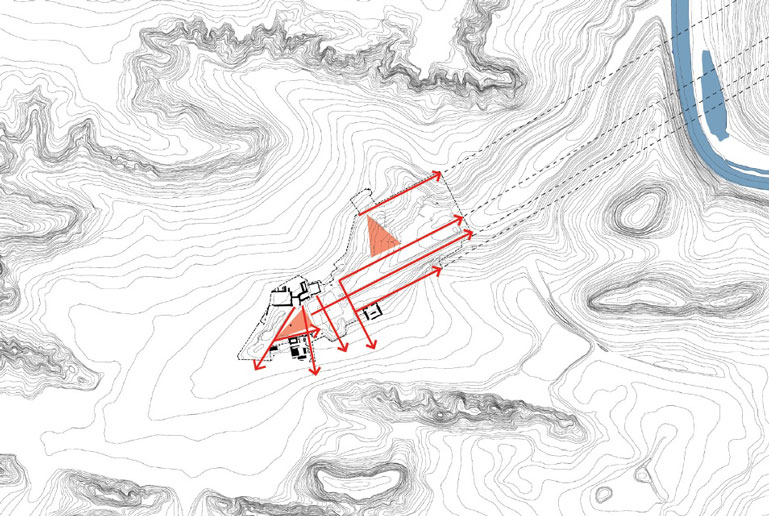 The masterplan proposes to put through the domain and its territory by asserting the main perspectives East-West towards the Seine river and North-South towards the hillsides and the forest. 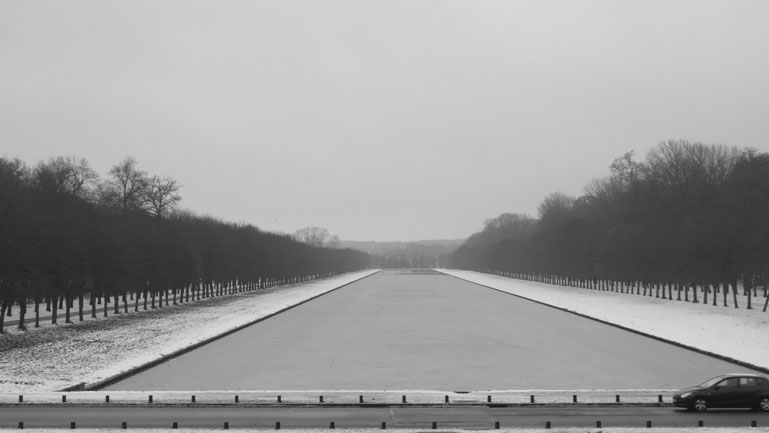 Fontainebleau it’s the forest: the hillsides, the points of view on the wood

The relationship between the park and the forest seems today to be quite poor while the layouts of the gardens of the forest are made from the same logic. 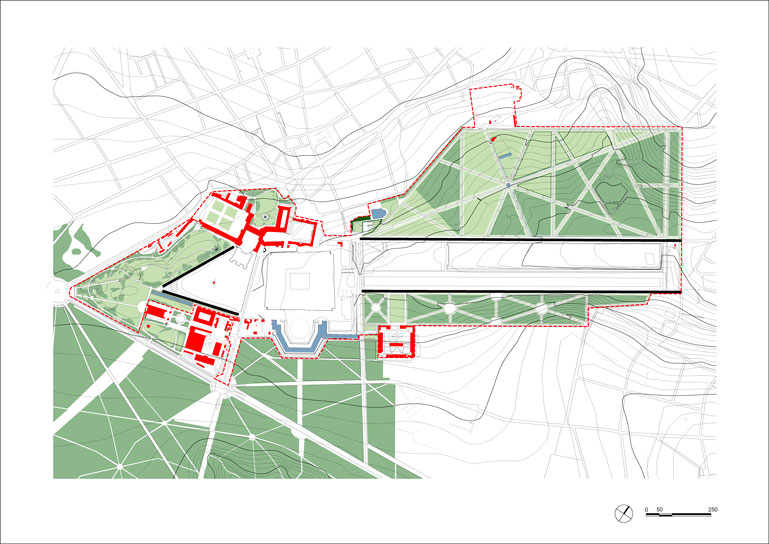 The trees in rows indicate the edges of the wooden hillsides

“My English garden is Fontainebleau’s forest and I don’t want another one” Napoleon I. 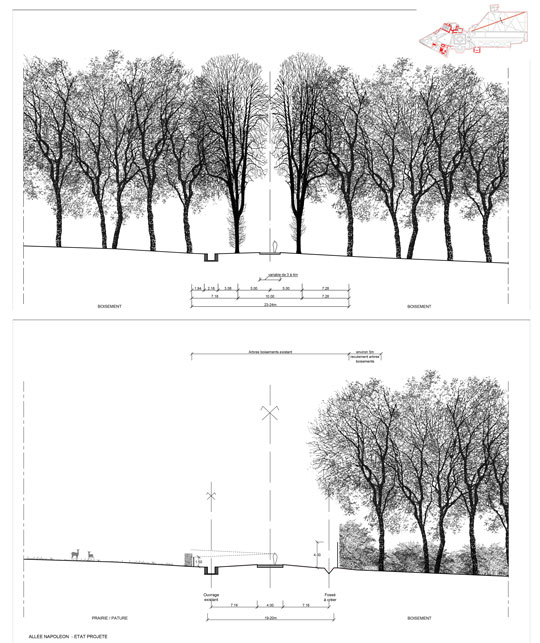 Napoleon’s alley – The masterplan proposes the hindsight of the afforestation in order to arrange an opening on the landscape. 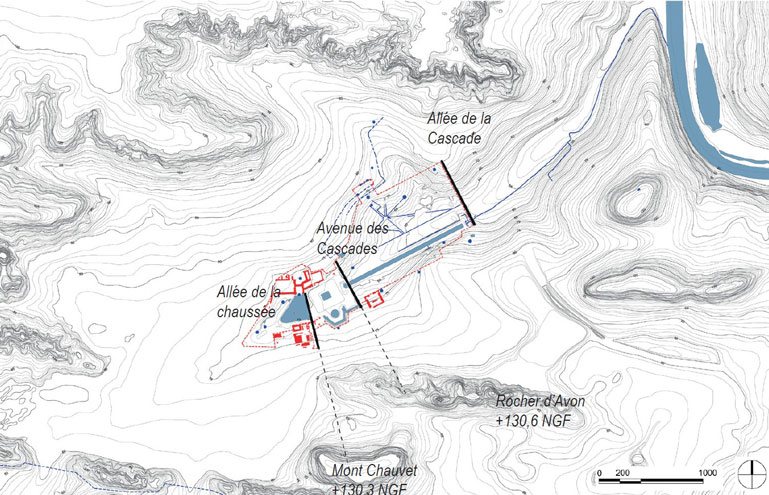 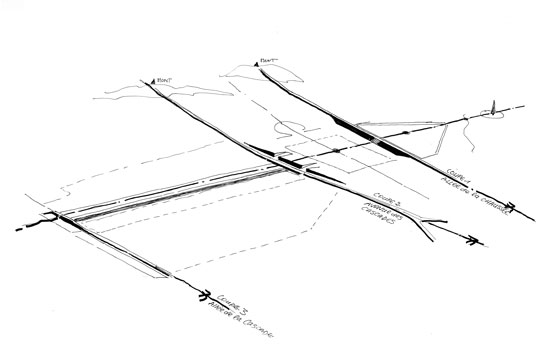 Give to read three works crossing the valley

The Carp pond constitutes the first dyke of the domain device (allée de la chaussée), followed by the avenue of the Cascades and the Cascade alley, downstream the Grand Canal. This device has allowed and conditioned the entire morphological disposition of Fontainebleau since the first establishment of the different parts of the castle, their typology, until the successive gardens, the Grand Canal structures, the Bréau, the Cascades, etc. 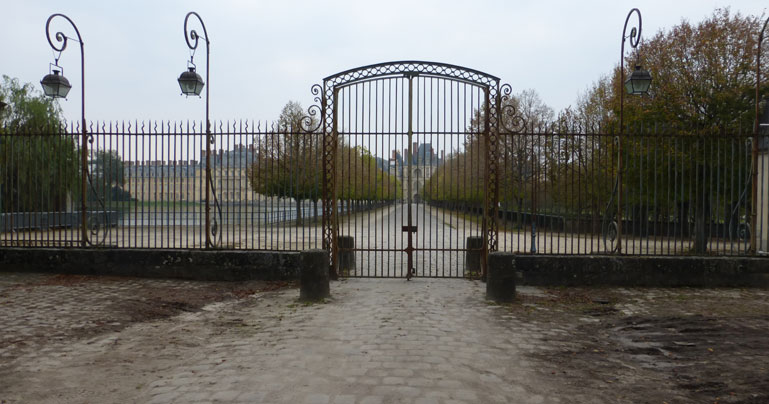 The scope of the water sphere

The question of water is recurring, essential, both in the foundation and in the development of the domain. Capture, conduct, optimize and have a better use of the water resources is one of the mainstay of the masterplan. 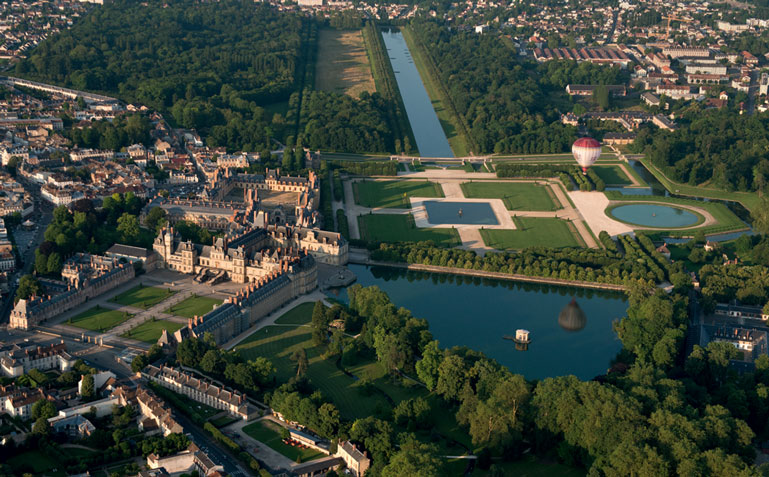 The main framework of the domain based upon water is put back in continuity between the Carp pond, the large parterre, le Grand Canal, the large meadow. The amplification of the water attendance is obtained by reactivating the cascades, with the extension of the Bréau, finding back the water effects in the large meadow and by reenabling the hydraulic machine. 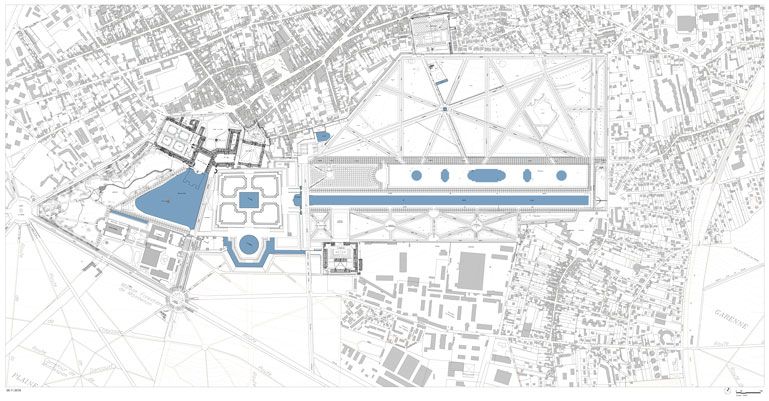 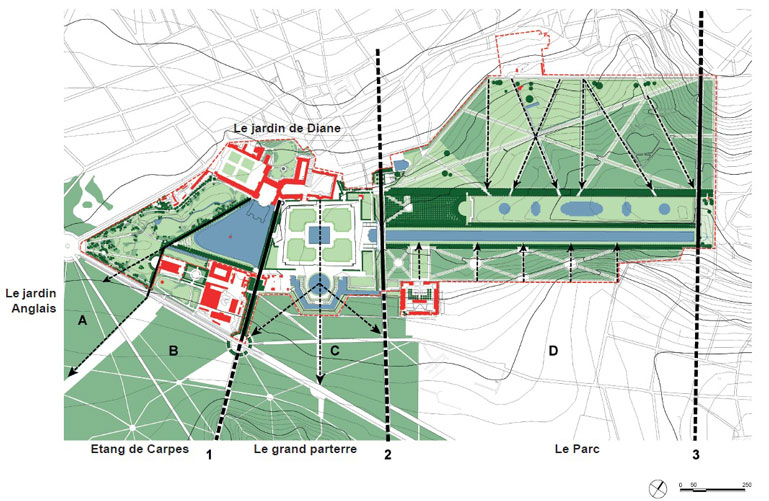 The “English” garden finalized in its way the birth of the talweg marked by the fountain of “belle-eau” (Bliaud), the Column fountain, the obelisk crossroad and the forest. Today the garden has a hard time finding its place back in this device. The site was above all a place of water abstraction, towards Carp pond reservoir, aspect that it should never have lost.

Restitute the space, the depth and the opening of the English garden on Fontainebleau forest 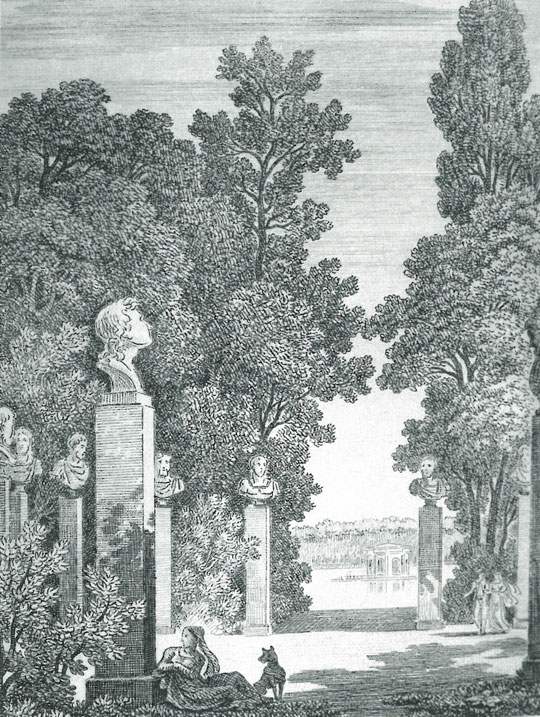 View from the castle toward the English garden, the Carp pond and the large landscape 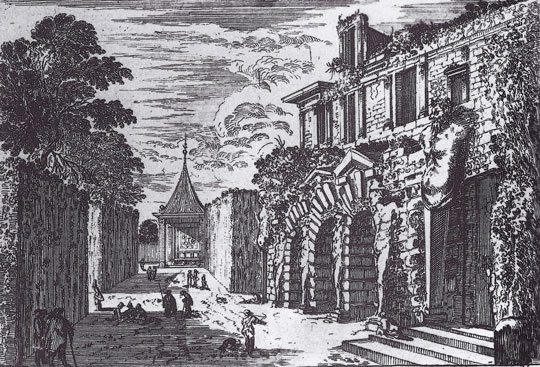 The Grotto of the Pines find back

The Grotto of the Pines and the pavilion of Pomone, state of the XVIIth century

The triangle geometry of the Carp pond is directly stem from the encounter of the birth of the talweg upstream and its dam downstream, the dyke-road, formerly the Chaussee alley (today the Maintenon alley), main entrance to the castle. 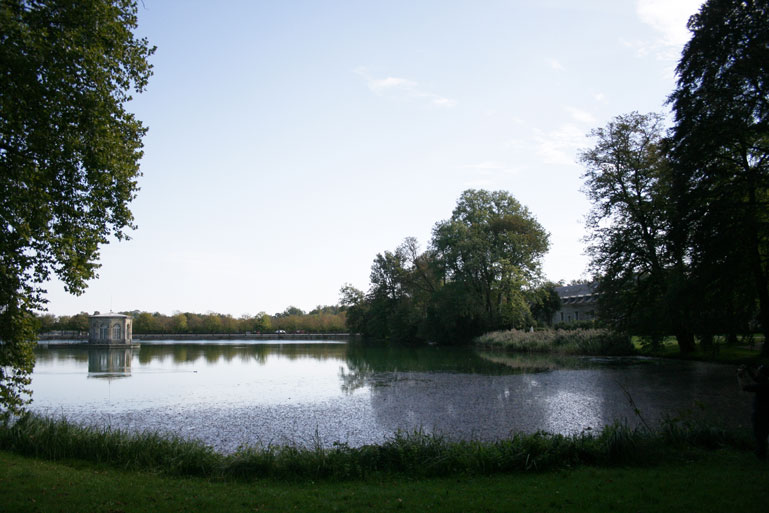 Opening the view on the castle 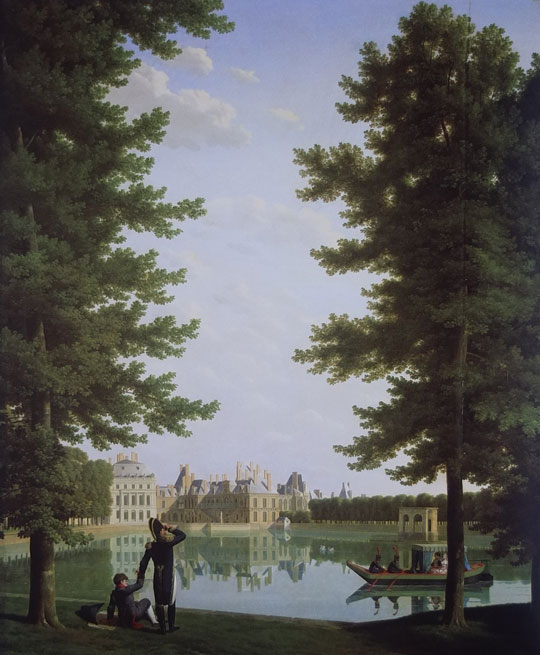 Thus, browsing the shaded alleys that border the pond, multiplying the points of view alongside the English garden, then the riding field and finally the Grand Parterre. This is one of the most beautiful promenades and one of the best points of view to the castle.

It seems important to find back the legibility of the device of talweg, by restituting the unity and the coherence of the pond on both banks by large rows of plane trees and by restoring the Maintenon’s alley as a dyke-chaussee between the pond and the Grand parterre.

The French garden: the Grand Parterre, the Bréau and the territory

The grand parterre is a unique figure in its kind, implemented by Le Nôtre, to reunify in one piece every part of the domain, from the various architectural typologies of the castle, to the gardens, dykes, the forest, the territory. It enables to federate a set of successive fragments into a unique and original work.

The Bréau rebalances the composition as a counterpoint to the castle

Give to read the thickness and the different levels of reference (Parterre, terrace, castle, Bréau, hillsides, afforestation)

It is really this device of territorial reunification that allows the Grand Parterre, it is not only its decorative character that is important to be understandable, as part of the masterplan.

The Cascades road – Hyphen and unifying link of the domain 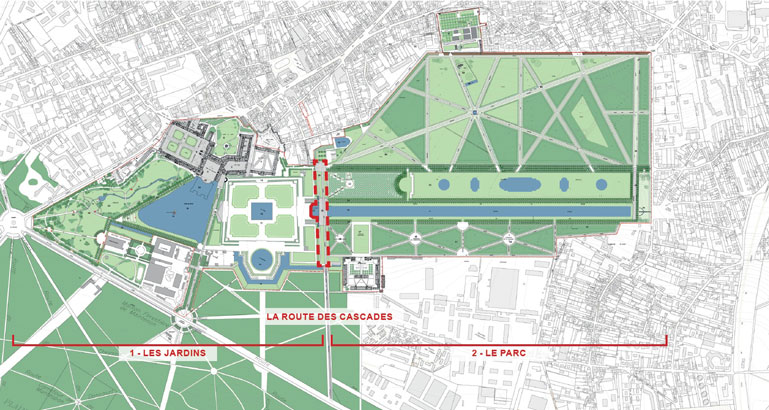 Today defined as trunk road, it is perceived as a break rather than as an essential piece of articulation and connection of the domain. The masterplan offers to transform it in a park road, by reducing the road allowance, claiming the promenade continuity (grand parterre, grand canal) and by labeling the valley bottom as a strong link unifying the Cascades and the Grand Canal.

The significant effect of Fontainebleau: the Grand Canal, the grand meadow and the Avon avenue 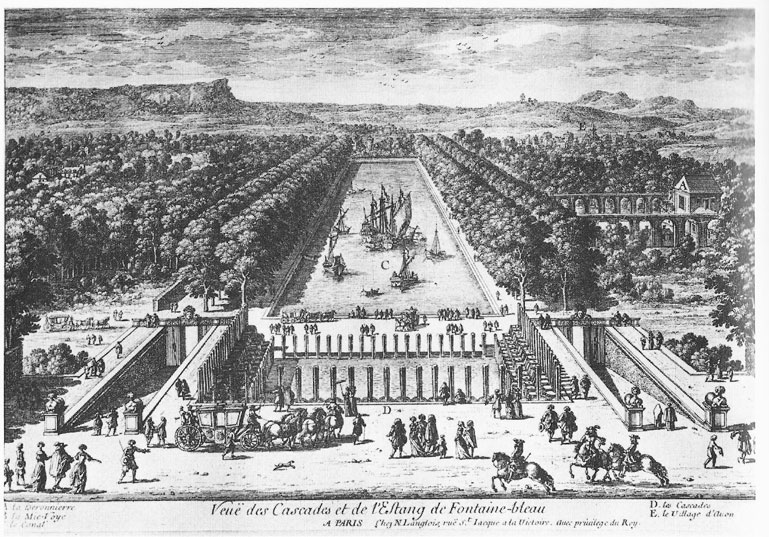 The grand parterre’s perspective finds its extension towards the grand canal that occupies the dale’s shore, perpendicularly to the Seine river. 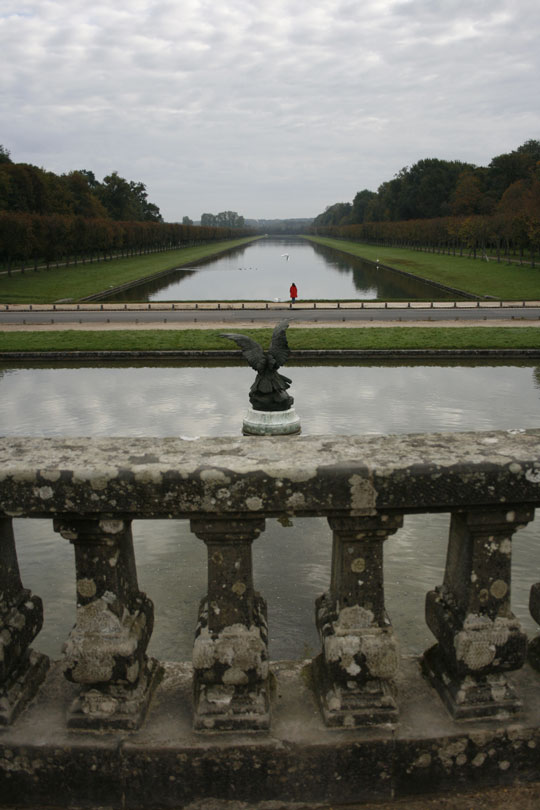 Thanks to the Cascades terrace and its two lateralize accesses to the park, Le Nôtre strains the gaze to pause on the territory, a managed perspective of the canal with the Seine hillsides, visible in the distance, squared par rows cut in shutter shape.

Le Nôtre obtains by this means an effect of surprise, reminding of certain devices at Vaux-le-Vicomte, the discovery of the grand meadow and the Avon avenue. 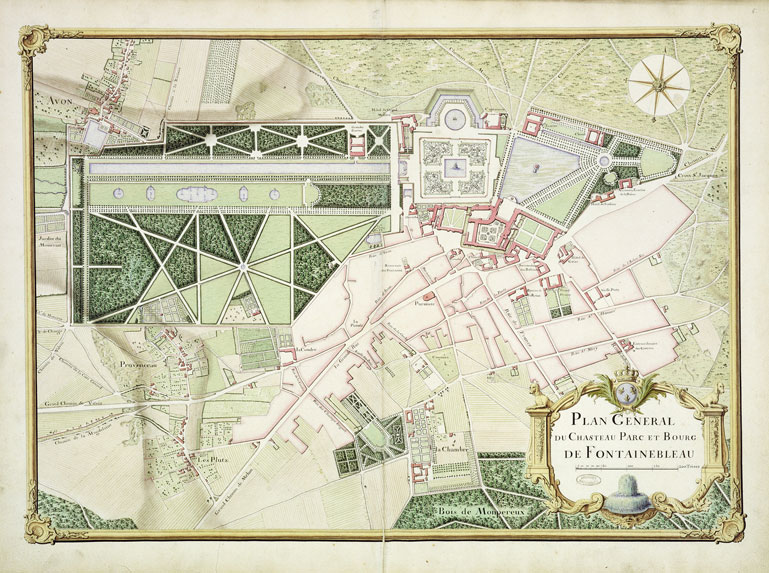 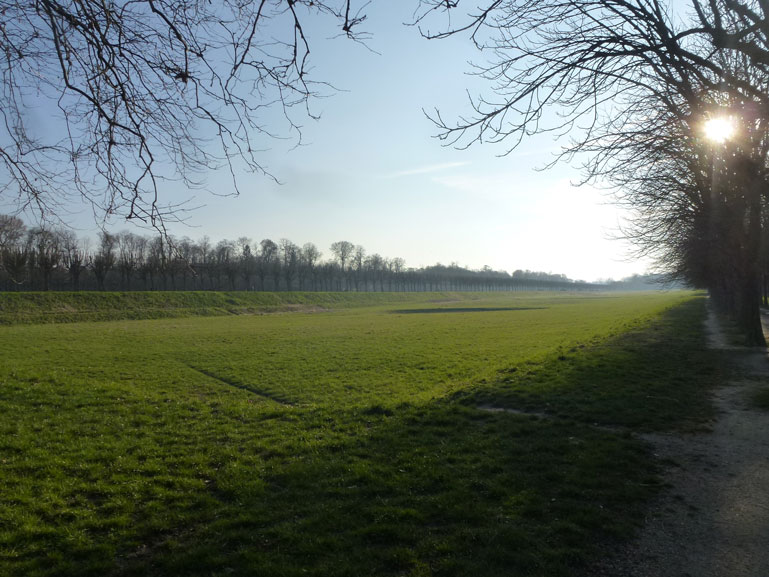 Today the grand meadow is disengaged whereas it used to be the main piece of this whole: the grand parterre is this space of the meadow.

The masterplan proposes to restitute this double effect of surprise by repositioning the general structure of the grand meadows, the Queen’s grove, in this device and giving back to the park its main interest. The basins of the meadows will be restituted in a contemporary way.